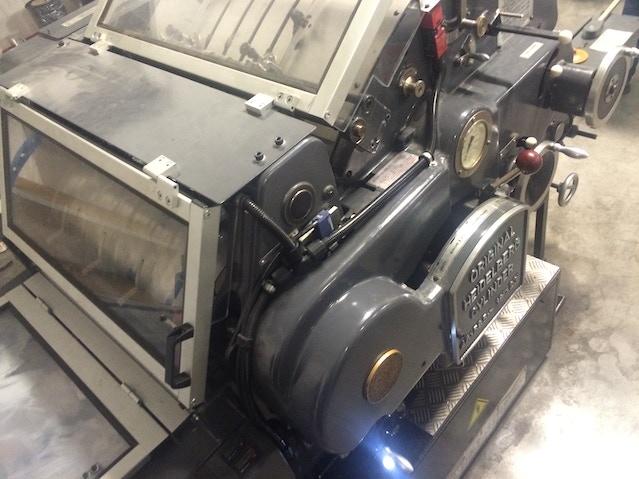 A respectable Heidelberg printing press in the printer's workshop. Top quality print guaranteed with that kind of machine !

Now that the KS campaign is over, we thought it would be a good time to show you a little bit of what has been going on behind the scenes. Let's start today with the early stages of the project:

When we started working on the WarStages project, our goal was to bring a level of “believability” that is rarely present in fantasy or sci-fi scenery. We wanted our buildings to be deeply rooted in historical and architectural references so that you could instantly feel like “this looks like something that could be real.”

We spent hours and hours into art books and on the internet and created an extensive archive with hundreds of pictures and drawings. We even took a trop to Paris and to London to check out a few things in real life. We wanted to mix the very distinctive traits of gothic architecture with more modern shapes to achieve the medieval sci-fi look we were looking for.

One of the main idea that we used to do this was to mix Gothic with the style of French military engineer Vauban, who revolutionized the building of fortifications in the XVIIth century.

The most recognizable feature of his military structures is the use of triangular shapes which we used as inspiration for some of our towers. Some of Vauban's fortifications in France

For Gothic references, we looked mostly at late “flamboyant” medieval gothic style from the XV-XVIth centuries and English gothic revival from the XIXth century. The over-the-top gothic patterns and ornaments of these two periods perfectly fit the twisted and dark mood of our Sisters. The Strasbourg Cathedral, a perfect example of over the top french gothic

One of our key reference was the fantastic “Encyclopédie Médiévale” by Viollet le Duc . If you are a fan of the Middle Ages, of historical re-enactments, or if you want to give a realistic medieval flair to your LARP, you MUST check this book (see WarStages Update #10).

We used his book as a reference for the whole team to use to create each ornamentation detail of WarStages. Gothic architecture is always based on the same basic patterns and structures. You get simple geometrical motifs that are used in an infinity of combination and permutations. If you get these patterns wrong, it look odd or fake.

→ GETTING THE SCALE RIGHT

A gothic cathedral is usually super big. We've calculated that to make Paris' Notre-Dame to the scale of a 30mm miniature, you would need a table with a length of at least 4m50 (nearly 15 feet)...

The height of these buildings is also very impressive, so one of the challenges we had was to rework the scale of that type of building all the while preserving the sensation of towering gigantism.

To this end, we squeezed all the horizontal shapes, and stretched all the vertical ones as much as we could. This gives a sensation of exaggerated height that goes well with gothic.

We also had to make sure we would preserve maximum playability. The building had to be high, but not so high that you would have to plunge your arm between crazy high walls to attempt to grab your miniature on the ground floor of the cathedral. All of this while trying not to topple down the scenery.

When we look at it now, it seems simple and obvious, but it took much trial and error to find the right shapes and proportions.

For the furniture, the work of Viollet Le Duc and some other online references were really key. Some medieval furniture was very much about displaying what you owned. The furniture would be used to display your best pieces of tableware rather than hide them in a cupboard for example. This means that some medieval furniture has shapes that don't exist anymore today. But these shapes were perfect as bases for gothic sci-fi computer consoles... A medieval buffet that was used to showcase great tableware pieces

We also did the exact opposite: we looked at Sci-Fi props from movies and video games and worked on how we could make them look Gothic. In essence, you always get the same elements in a Sci-Fi environment: sleeping / cryo / medical pods, large computer consoles, cybernetic chairs, ventilation systems, tubing, etc.

We took that and reworked these shapes to give them a gothic feel, just by adding some ornament, or by basing the whole look of a prop on a typical gothic structure. The ventilation system for example is an upside-down gothic vaulted celling.

In our next Update, we will continue this behind-the-scene feature and discuss concept art, size and scale, materials, etc.

What's Next for Raging Heroes

With now three big Kickstarters under our belt, we have identified many patterns and key notions in how to make things work better for our backers, our collaborators and our company.

One is these key patterns is that to run properly, Raging Heroes must have have a regular calendar of overlapping Kickstarter projects. This is why our next project, our TGG3 Kickstarter - that will launch our TGG game - will happen before year-end.

If you'd like to understand more about this reasoning, if you're curious to know what goes into running a company with crowdfunding projects, if you've wondered about entrepreneurial life particularly in the wargaming industry, keep reading for a more in-depth look into all of this.

So why work on several projects at the same time?

The easiest option for us would be to run a Kickstarter project once every year or two. We'd have a creative team come in at the beginning for several months then leave the project altogether, not to be called upon until the next Kickstarter, about 12-18 months later. The same would go for every other team in the project. We would only need a core team of 3-4 people managing the company year-round, and each of them would be focussed on one task at a time.

This option would be way more comfortable, and less costly. But we run a substantial risk of loosing the most important Raging Heroes resource: people.

Finding the right people, training them to our expectations, make them understand our processes, all takes A LOT of time and personal investment. Letting these people go idle or to other companies for months on end is professional suicide for us.

Furthermore, we work in an industry where, for a company of our size, it is very difficult to keep a full staff full-time or nearly full-time. But before Raging Heroes, we lived the freelance life for over 15 years, so we know how it feels to not know where the rent is coming from next month. So it is very important for us to provide as much stability as possible to our team. We feel very responsible for the people we work with, and strive to do the best for them.

→ PROJECTS: WHEN AND WHAT

We are very aware that TGG2 has been a wonderful project but also a project that is way too late in its delivery. This takes a toll on backers' morale and on everybody in the company. Take a look at the second part of our latest TGG2 Update if you want to know more about our conclusions on that particular project.

At the same time, by now, we have created such a massive range that there are now tons of possibilities to be explored in terms of games and stories.

Adding scenery to the mix with WarStages means that we now can create and use awesome game environments. With the TGG game coming very soon, it looks like we are just at the beginning of something truly rich and special.

Every company works on different types of projects with different infrastructures. Some are very small companies that are operated as a side project side-by-side with a “real job”, whereas others are launched by larger companies like CoolMini, Mantic or Mythic Games.

As we went from a “side” project in our living room to a tiny company with 3 people and then to a larger outfit with a team of 20 and more, the organizational structure changed drastically. The company got a design department, a logistics one, dedicated customer service staff, and more. People are recruited each time for their specific skills. In fact, the larger part of the team is not actually on site with us at the studio, we have freelancers all over the world. We spent a lot of time selecting the right team members, training them to Raging Heroes' standards and style, and it is important that we can keep working with them all year round with no downtime so that we don't lose our working relationship.

This means that the company must constantly have new projects in development, and that these projects must be launched in specific time frames. As the company gets bigger, it is key to have overlapping projects that keep your various teams busy at different stages of each project. Going forward, we will continue to run overlapping Kickstarter projects in a staggered manner. And so you can look out for our our next Kickstarter: TGG3 +TGG game; it is already in an advanced state of development and will be launched before year-end.

For many backers, seeing and understanding what's going on behind the scenes is a key part of the Kickstarter experience. And as a project creators and a miniature company, it is also very important for us to share with you how we will continue to strive hard to expand the company and the range, solidify our team, output as many beautiful worlds, sceneries, miniatures and games as we can... We're so glad to have you with us for the ride! Thank you for making it all possible!